Last weekend, we went up to the Brown County Fair to spend some quality time with the grandparents (and eat junk food). We had a great time, it’s been since HS that I went so it was fun to go back. Didn’t see many ppl I know, but the kids loved the rides and grandparents enjoyed spoiling them. They even let Ava throw the darts at the balloon game, which she nailed.

My parents then proceeded to break the cardinal rule of festivals, (Rule #1: No Goldfish) and “won” us a goldfish. So Julie bought a bowl, food and some rocks and we were nervous when we read that they can live up to 10 years! Ava named it Goldie, and Cassie was probably the most excited about the newest member of the family. She could spend a solid 5 minutes shouting and waving at Goldie, then come back and do it an hour later.

Unfortunately, Goldie did not make it ten years. He passed quietly this afternoon, and will be buried later tonight after the little ones are fast asleep. Goldie, it was fun while it lasted and you will be missed. 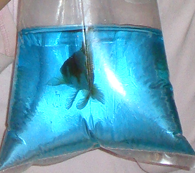