I would like to say I’ve been saving this, but to be honest it totally slipped my mind. It’s big deal though! When we started doing the magnets, we said 80% would get each girl a pony. So, if they got 42 magnets in any one week we’d buy them a little pony. We rarely ever buy them toys outside of bdays and holidays, so we thought it was a nice treat if they would shape up a bit.

Ava snagged 43 magnets the first week, so she got her pony. Lily came in short, she’d having trouble with hitting and teasing. Neither of them can stop whining so essentially they’ve each got 49 chances to get 42 magnets. In the past 4 weeks, only one Whining magnet has been received and that was Ava a couple weeks back. 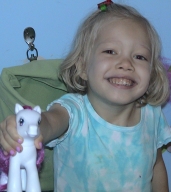